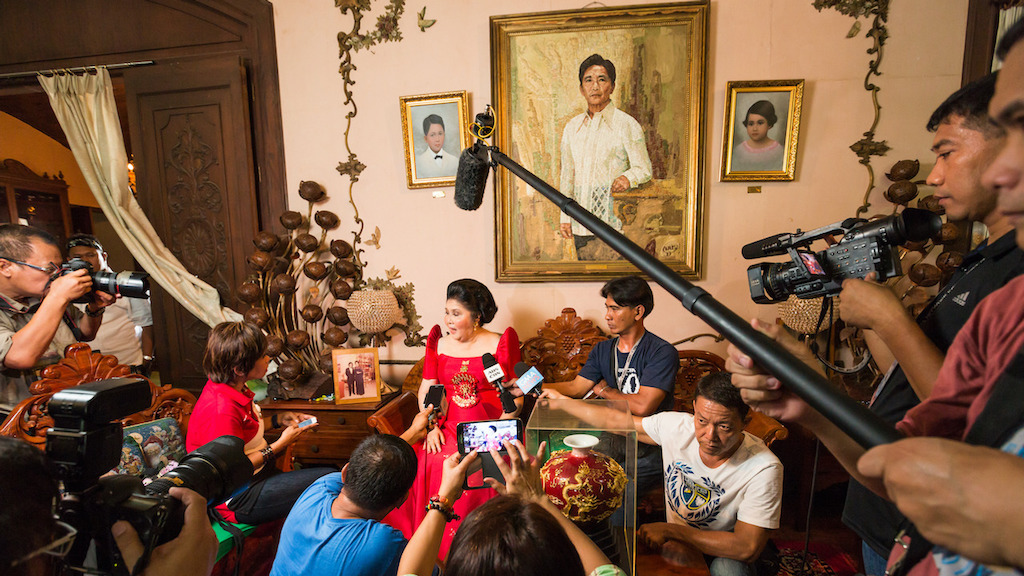 I love the Philippines. But I know so little about the turbulent history of the Marcos era until I watched The Kingmaker.

The film by Lauren Greenfield presents a caricature of Imelda Marcos, ex-First Lady of Philippines, wife of Ferdinand Marcos who was President from 1965-86. The last 8 years of his rule were marred with violence and oppression under martial law.

Imelda Marcos is the Rosmah Mansor (ex-Malaysian PM’s Najib’s wife) of her time. An ex-beauty queen from humble beginnings, who caught the eye of a charismatic politician, their love story is as clichéd as can be.

Except this story isn’t about love. It is about power and how a family’s insatiable greed for hedonistic pleasures (cue long shots of her 3000 pairs of designer shoes) and a life of decadence led to extreme means for political dominance.

“Perception is reality, the truth is not,” states Imeda, midway through the film. The belief is repeatedly demonstrated with the director’s juxtaposition of Imelda Marcos’s personal narration of life events with contrasting witness accounts. From her supposed loving marriage, to her smothering of an entire nation’s wealth and financial aid in the name of “mothering”, to her purchase of African animals for the love of beauty and nature.

In the face of recordings from Ferdinand Marcos’ affairs, her personal collection of Monet and Picassos paintings worth millions used to fund her son’s political campaigns, journalists recounts of silence by torture and interviews with native residents displaced so that her giraffes and zebras could have a place to stay – it is impressive how Imelda Marcos manages to distort reality. You would almost believe her openness, gentle demeanour, her seeming simple-mindedness.

Imelda Marcos may be a narcissist but she is definitely not silly. “Sometimes it’s good not to be taken too seriously,” she reveals. She knows exactly how to play to her strengths.

What is deeply unsettling is her success in rebuilding support for her family, despite the corruption. Her influence runs deep, and you can’t help but feel a little sad for her son. Yes, Ferdinand Marcos Jr (Bong Bong) is equally terrible in his own right, but there is a sense that he will forever live in his father’s shadows as a pawn in his mother’s plans to store the Marcos dynasty.

The Philippines in the 60’s was the second largest Asian economy, trailing only Japan. Marcos had inherited a rising economic star. Yet decades of political strife and corruption has derailed their progress. In the right hands, the Philippines, would be a force to be reckoned with.

Towards the end of the film, the Marcoses connections with current President Duterte and his political campaign are further explored. I want to be hopeful, but something tells me that history repeats itself. We see the same story playing out time and again, and it’s almost like these we can’t help ourselves.